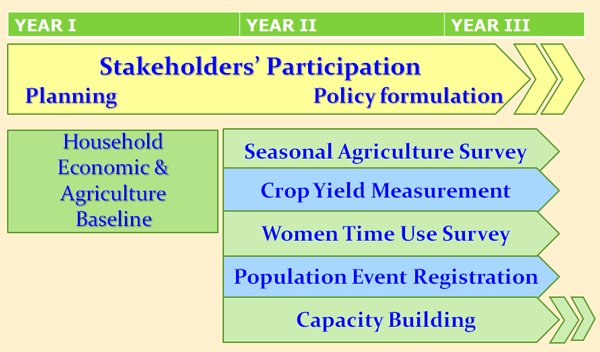 1. Baseline Household Agriculture Survey The survey was initiated in July 2015 and was completed in September 2015. The survey collected retrospective information on land holdings, agricultural practices, crop yield production, livestock, family members migrated and remittance obtained. The data collected has been archived and secured.

3. Seasonal Agriculture Survey-2 The seasonal agricultural survey for the next season (Season 2) was initiated in February 2016 and completed in April 2016 with 99% response rate.

4. Seasonal Agriculture Survey-3 The third round of survey of the agriculture survey is currently running. The data collection initiated in July 2016 and is proposed to complete in September 2016.

5. Demographic Monitoring The monthly demographic registration of the households surveyed for the baseline agriculture survey is being conducted in every four months.

A one-day workshop titled “Research Dissemination and Policy Workshop on: Labour Outmigration, Agriculture Change and Consequences for Left Behind Women” was conducted on International Migrants’ Day, December 18, 2017 at Hotel Shanker, Kathmandu, Nepal. The workshop was jointly organized by ISER-N, the Agricultural Forestry University (AFU), and the Population Studies Center (PSC) at the University of Michigan, with financial support from the Overseas Development Institute (ODI), UK. The goal of the workshop was to share the empirical findings generated through rigorous scientific investigation of labour out-migration, agricultural change and its consequences for left-behind women and foster policy dialogue to integrate findings with policy. Additionally, the workshop also aimed to facilitate cross-disciplinary interaction among scientists and research scholars, crucial for building a foundation for interdisciplinary research, education and public policy. The workshop envisioned a policy formulation process more complex than a simple interaction between researchers and policy makers and was designed to reach a wider audience that includes educators, activists, development practitioners, government line agencies and funding agencies, who, the team believes, have a substantial role in the process. Details of the Dissemination Workshop are provided in the report below.

A Workshop on Integrating Social and Agriculture Science: Building the Foundation for Interdisciplinary Research in Nepal

A one-day stakeholder workshop on “Integrating Social and Agriculture Sciences: Building the Foundation for Interdisciplinary Research in Nepal” was conducted on November 30, 2014 at Hotel Himalaya, in Lalitpur, Kathmandu, Nepal. The workshop was jointly organized by ISER-N, the Agricultural Forestry University (AFU), and the Population Studies Center (PSC) at the University of Michigan. The primary goals of the stakeholder workshop are to foster intellectual interaction among potential consumers of the evidence that this project will generate through rigorous scientific investigation as well as to gather stakeholder feedback. This project aims to build a foundation for interdisciplinary research, education, and public policy. We believe the first step in accomplishing this aim involves engaging all potential stakeholders-local, regional and national-from the very beginning of the project. This workshop and the resulting report document a crucial first step in the life of this project.

An Interaction Program with Study Participants

A one-day interaction program was successfully held between the Principal Investigator (PI) and the study participants of the project on December 1, 2016. The event was conducted at ISER-N premise, Chitwan. There were altogether 44 study participants. The goal of the interaction program was to share with the participants, the objectives of the project and to acknowledge their voluntary participation as respondents. In the program, Ms. Chaudhary, Study Manager, ISER-N welcomed the participants while Mr. Adhikari, Data Manager, ISER-N explained about how the confidentiality of the data ISER-N collects is maintained and how they are managed. Dr. Dirgha Jibi Ghimire, PI and Executive Director, ISER-N, explained about the importance of the research and heartily thanked the participants for their time and cooperation with ISER-N during every phase of data collection. Dr. Ghimire also shared some of the preliminary results of the project after which the feedbacks from the participants were collected and addressed to the extent possible. With this program, we believe, the participants have become positive towards the research and they have also agreed to cooperate with ISER-N in future too.